The Lutterworth & District Museum is an independent museum, staffed & run entirely by volunteers.

John Wycliffe, ‘The Morning Star of the Reformation’ was a 14th Century church reformer who was strongly opposed to the doctrine and possessions of the Catholic Church.

He spent the greater proportion of his adult life as a Professor at Oxford, but following his prosecution for heresy in 1371 he retired to his ‘Royal Living’ of Lutterworth, granted to him by Edward III.

During his time in Lutterworth, assisted by his followers including Nicholas of Hereford, John Horn and John Purvey, he completed the first translation of the bible from Latin into English in 1373.

The following year he suffered a severe stroke and died on 31st December 1384.

However, the Catholic church pursued him after his death. He was denounced as a heretic by the Council of Constance in 1415 and in 1428 Richard Fleming, the Bishop of Lincoln was present with other church dignitaries to see his bones exhumed, burned and the ashes thrown into the River Swift.

He was entitled ‘The Morning Star of the Reformation’ as his pioneering work influenced not only John Huss in Bohemia but the works and writings of Martin Luther who led the Protestant Reformation in the 16th century.

There is a monument and interesting artefacts to John Wycliffe in St Mary’s Parish Church. 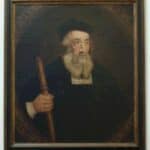 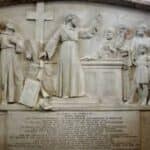 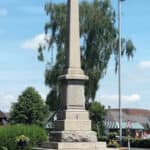 John Wycliffe spent the last three years of his life in exile at Lutterworth.