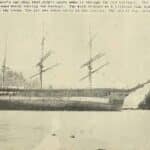 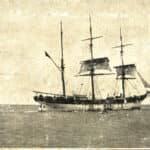 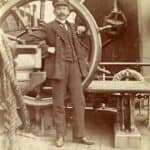 Lutterworth Museum holds various pictures and information about SS Lutterworth. The owner of an original wooden bucket from SS Lutterworth was recently donated to the Museum. On the bucket the name SS LUTTERWORTH is still clearly visible.

One of the Shaw, Savill Line—Dismasted in Cook Straits—Ship Thrown on Her Beam Ends—

Rescue of the Crew.

Of all the ships that traded to New Zealand in the early days, and brought so many thousands of settlers to the colony, the number that have ended their days here is remarkably small. Probably the most interesting of the few was the Lutterworth, a fine iron barque of 883 tons that was launched at Hartlepool in 1868, and was purchased in 1872 by the Shaw, Savill Company for the New Zealand trade. She was not a flyer, but made good average passages.

After trading between England and the colony for over thirty years she was sold to Messrs. Turnbull and Co., of Christchurch, but her active career was ended a few months later, when she was dismasted during a south-east gale in Cook Straits. The misfortune happened in October, 1906, when bound from Timaru to Kaipara to load timber for Melbourne. She was first observed to be in serious trouble by a settler living at Kopotorua Beach, who rode into Levin and reported a ship some eight or nine miles off the land, apparently dismasted. The news was immediately conveyed to Wellington, when the Marine Department sent out the steamer Duco to search for the vessel and render assistance. When the Duco discovered the barque it proved to be the Lutterworth, and she was being towed by the tiny 77 tonner Aorere, Captain Fisk.

A severe S.E. gale had been blowing in the Straits for several days, and the Aorere, bound from Patea to Wellington, when off Kapiti Island, was struck by a squall of hurricane force, and had to seek shelter there. The following day she made for Ohau Bay, and while at anchor there the Lutterworth was sighted drifting through the middle of the Straits. A heavy sea was still running, with strong S.E. squalls. Later the sea moderated, and the little Aorere set out in pursuit of the wreck, which was reached at dusk. No response was received from signals made, so Captain Fisk decided to stand by until daylight, when the ship was taken in tow. Later the Duco came on the scene, and the two steamers towed the vessel into Wellington. On arrival it was learned that the crew, numbering eighteen, had been rescued by the steamer Penguin, bound from Wellington to Picton, and they were later conveyed to Wellington.