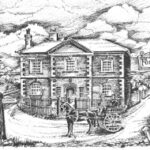 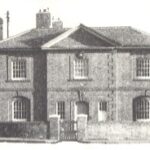 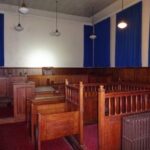 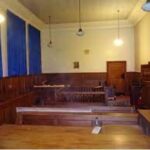 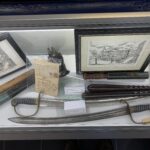 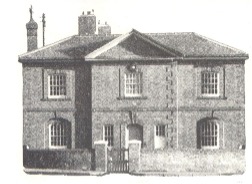 Archive records tell us that Lutterworth had a form of law enforcement as early as the 1650’s, when Constables’ accounts include expenditure on a cuck-stool (ducking stool) with wheel, a whipping post and a cage (lock-up). A “night watch” was agreed in 1789 and ‘places of confinement’ were built in 1812. These were probably the underground cells within the gaol which stood at the junction of Regent Street and Stoney Hollow – these are believed to still exist below where the “White Horses” welcome visitors to Lutterworth from the south.

Lutterworth Police Station was built in 1843 on the junction of Leicester Road and Gilmorton Road at a cost of £731. It is believed to be the first purpose built Police Station and Magistrates’ Court in the country, and it had two cells, a walled yard, office and a Superintendent’s house, although the Superintendent’s post was downgraded to Inspector in 1922. Lutterworth Division then had two Sergeants and seven Constables, with the Constables and one of the Sergeants living in eight different villages. With the aim of reducing divisional costs, the Home Office gave agreement in 1930 for the Sergeant in Lutterworth to be provided with a car, for three village Constables to be provided with motorcycles with sidecars enabling them to patrol larger areas, and for the other officers to be replaced by police boxes. When the change took effect in 1931, Lutterworth became the first county police division in England to use a motor patrol system.