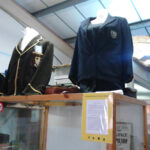 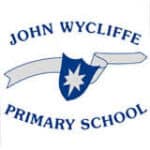 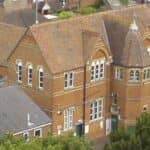 In 1986 Lutterworth High School was the only school in the town offering Education to the 11 to 14 year olds. It is a Secondary School for boys and girls and was built in 1927.

Children become members of one of the four school HOUSES which are named after famous people from the Second World War – Montgomery (Blue), Tedder(Red), Cunningham(Yellow) and Churchill(Green).

The School Motto is “Life is Service”.

There has been a school in Lutterworth at least since 1613 though the first part of Lutterworth College, then named Lutterworth Grammar School was built in 1880 to provide a middle class boys school for approximately 50 boarders and day scholars. The school remained an all boys grammar until 1902 when the school began to admit female pupils.

In 2006, it was agreed to change the school’s name from Lutterworth Grammar School to Lutterworth College, to reflect the fact that the college “is not a selective institution, but rather an inclusive one Lutterworth is a small market town in south Leicestershire, close to the borders of Warwickshire and Northamptonshire.

It had a number of educational charities, which supported two schools for boys and one for girls, and also provided apprenticeships for poor children. Under a scheme prepared by the Endowed Schools Commissioners in 1874, these charities were merged to create the Sherrier public elementary school (built in 1876) for boys, girls and infants.

Lutterworth Grammar School, originally for 50 boarders and 30 day-pupils, also owes its beginnings to the original charities, and opened in 1881.

Lutterworth was one of the last parishes in Leicestershire to become part of the so-called ‘Leicestershire Plan’, which introduced comprehensive education across the county’s secondary schools in stages between 1957 and 1969 through a high-school/upper-school structure.

There are two primary schools in Lutterworth: John Wycliffe Primary School and Sherrier Primary School. Sherrier was originally housed in a Victorian building on Churchgate before moving to a new location on Bitteswell Road in 1983.Sherrier featured on the BBC TV children’s TV programme Blue Peter on 5 February 2008

The local secondary schools are Lutterworth High School (for ages 11–16) on Woodway Road and Lutterworth College (for ages 11–18) on Bitteswell Road, both of which achieve good results in applicable exams. A new Studio School called Sir Frank Whittle opened in 2015 (for ages 14–18) that offers purely vocational courses.