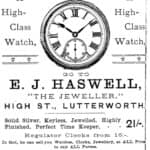 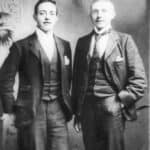 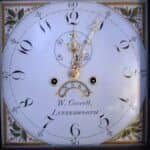 The Corrall family were famous Lutterworth clockmakers in the 18th and 19th centuries. E.J.Haswell was equally well-known in the 20th C.

CORRALL, THOMAS- LUTTERWORTH: Clock and watch-making from before 1756 until 1795. Brass dial, LMC.

HASWELL-LUTTERWORTH: A wall clock by him (c. 1840) has been recorded

Example of Some of the Clocks