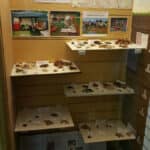 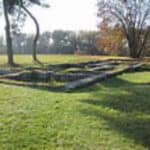 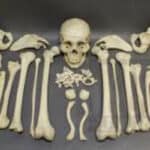 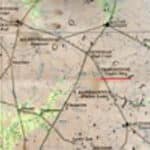 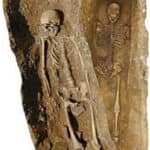 In 2017, for the Festival of Archaeology, we decided to dig a number of test pits near Brookfield Way with a view to finding evidence of Roman occupation. There is an Iron Age settlement where the Bellway Homes estate is situated as well as a Roman field system, which extends round to the far side of Brookfield Way. We had a total of 29 diggers/sievers on Saturday and 15 on Sunday. The area near Lilac Drive is owned by Taylor Wimpey, but originally was owned by Bryant Homes who built part of the estate. In one of the pits we found 12 flint flakes and 2 flint blades while the oldest pottery sherds were  of Potters Marsden (13th C), although the majority were late Medieval. Unfortunately 500mm down we found a Pepsi bottle dating to 1973 and suggesting the site was landscaped after completion of the site. The pits dug on Sunday were near Lavender Drive and yielded minimal finds. The volunteers, on both days, really were enthusiastic and worked extremely hard and although there were few finds all seemed to have enjoyed the experience.

03 July 2016: Bradgate Park Open DayThis is the second year of excavations by ULAS on this site Our own Jackie will be working there, organising the finds.

10 July 2016: Jewry Wall Museum Festival of Archaeology Launch DayWe couldn’t attend last year because we were digging our test pit at the Carnival. As far as is known we will have a display and need to showcase our day on 23rd. If anyone is interested in coming along to help out please let Mike know.

Presentations by Dr. Graham Morgan on Archaeological Forensic Science and Rachel (from ULAS) who will talk about bones. The VCH Group will display their current work on Lutterworth, Brian will showcase Fieldwalking and Bob Wells will be flint knapping . ‘Fred’ Hartley may well be with us to ‘launch’ his new book in Lutterworth on earthworks in South Leicestershire.

Our Archaeology Saturday takes place every year during the National Archaeology Fortnight.  Thanks to a dedicated and hard-working team of enthusiasts, led by Peter Liddle MBE, former County Archaeologist, more events take place in Leicestershire and Rutland than anywhere else.

If you are interested in the history of the Lutterworth area (and it goes back 10,000 years or so) or just interested in history, please contact Mike on michael.southall@mypostoffice.co.uk.